An overview of the Boy Scout and Girl Scout organizations, past and present. 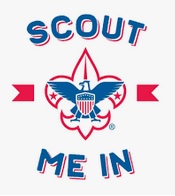 "Boy Scouts Are Just Scouts Now, and That's Making Girl Scouts Mad" is the title of an article that appeared in Bloomberg Businessweek on April 17, 2019 by Claire Suddath. Click here.

This is a terrific article! It's an overview of the Scouting program that includes some of the 100+ year-old history, a look at controversies, and a look at ongoing problems and proposed solutions. There's some Girl Scouts USA (GSUSA) history too, along with a "compare and contrast." Because the article appeared in Businessweek, there's also discussion about how Scouting BSA and how GSUSA finance themselves and about current Scouting BSA financial worries.

In spite of the article's title about how dropping "Boy" from "Boy Scouts" is "... Making Girl Scouts Mad," that is mostly downplayed. In fact Suddath dismisses that particular controversy with, "Two of America's most benign charitable organizations fighting over the right to call young girls “scouts” feels a bit like the Humane Society and ASPCA arguing about who can best care for kittens." Instead, Suddath says that the real concern "is a much more fundamental argument about the best way to advance women's equality." GSUSA says that this is what girls need and that GSUSA knows how to do it best.

Most disheartening for both organizations is a chart showing membership climbing steadily through 1973, and then declining quickly to less than half. 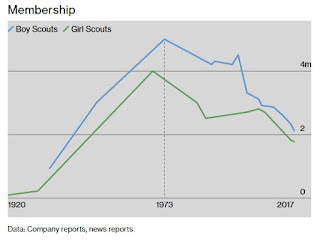 Included in Suddath's article is her interview with Chief Scout Exec Michael Surbaugh in order to get his take on declining membership and other problems. Suddath also tells how she interviewed Scoutmasters, parents, and youth, and said, "I realized: The only people upset by BSA's new policy seemed to be adults. I talked to dozens of kids for this article, and every one of them said they liked the idea of girls in Scouts."