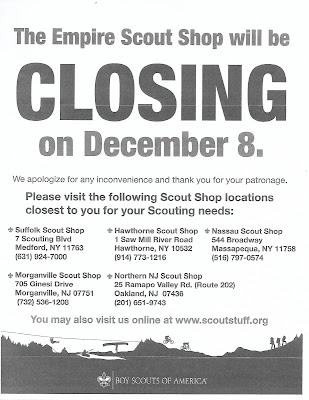 In its wisdom, the Boy Scout National Supply Group decided that it was time to close the Empire Scout Shop in New York City with no replacement.

The flyer on the left gives the link for the ScoutStuff online catalog plus the other Scout Shops that are still open, including the one in Oakland inside the Northern NJ Council Service Center.

However, there is a Plan-B for Scoutmasters and Cubmasters who formerly purchased advancement badges and awards from the Empire shop. The Greater New York Councils are willing to accept orders by e-mail and hold the items for pick-up in their Empire State Building office. Click here for details.

The Scout Shop closure will be a disappointment to all the Scout tourists who come to New York City from around the country and from foreign countries.

Not sorry to see the Scout Shop close will be all the people who dropped in prior to Halloween looking for a cool costume to wear at a party. These folks were all dismissed unceremoniously with the stern lecture, "IT'S NOT A COSTUME! IT'S A UNIFORM!"