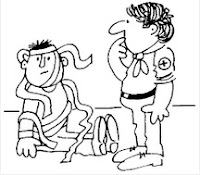 This was 302's 59th annual First Aid Rally, starting from when they were Troop 2, and continuing through various councils and districts and mergers and consolidations.

There were three scenarios: