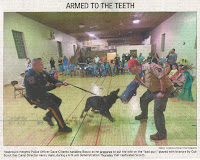 
Yaw Paw Day Camp Director Henry Hahn volunteered to be the bad guy! This photo appeared in the Bergen Record on April 22. Click on the photo to enlarge it.


Posted by 3 Rivers District, Northern NJ Council at 10:22 AM